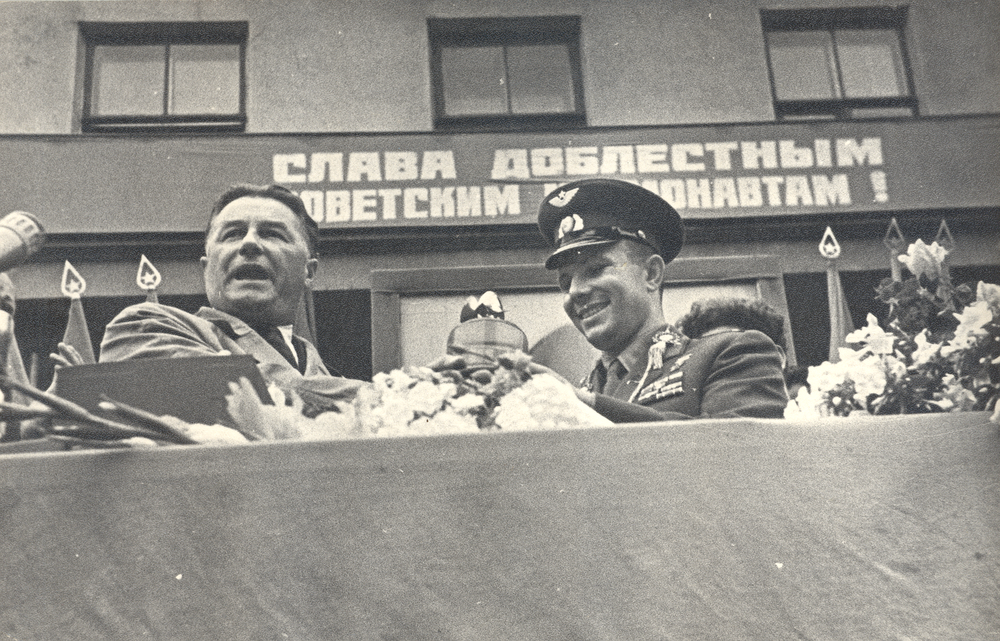 Meeting with Yuri Gagarin at LMZ, 1962

Anniversary of man's first voyage to space was a landmark day in the history of Leningrad Metal Plant (LMZ), which was directly involved in the preparations for the flight. Unbelievable as it may seem, after so many years since those momentous times, some of the people who have a clear memory of Yuri Gagarin's visit to LMZ in August 1962 still work at the plant 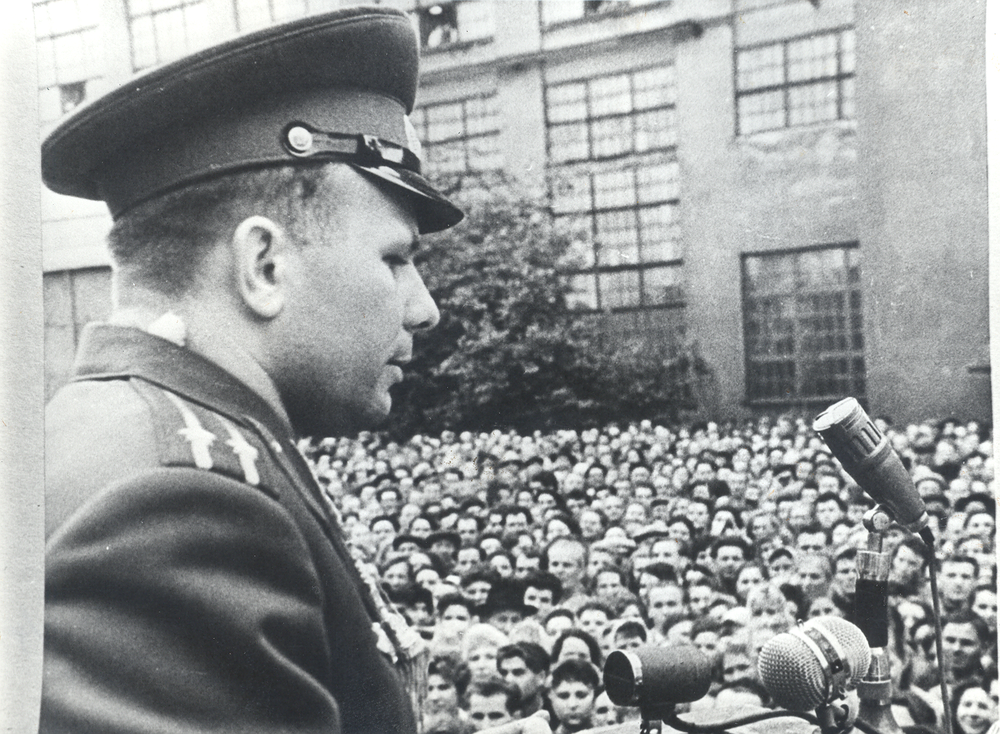 Yuri Gagarin speaks to the people of LMZ, 1962

“Each of us would be happy to stand in the place of this heroic pilot. Our hearts were with him during the flight,” wrote A. Ishin, Hydro- Turbine Shop Foreman.

One of the longest serving employees at Special Design Bureau Turbina is Igor Yablokov, a design engineer who joined the plant in August 1957. In September 1959, the young specialist was called up for military service and joined the Air Defense Forces.

In April 1960, his reserve regiment was deployed from Zelenogorsk to Baikonur to guard the cosmodrome which only a year later became the launch facility that gained fame around the world. “It was a time of great achievements,” Igor Vitalyevich reflects. “The most impressive and memorable of them were the launches of space rockets with our first astronauts – Yuri Gagarin, German Titov, Pavel Popovich and Andriyan Nikolayev – on board. We were so proud of our homeland then.”

“Listening to the radio messages about the flight, I was concerned for him as I would be concerned for the most important person in my life,” wrote A. Nikolayev, Head of Assem- bly Fitters Team at the Steam-Turbine Shop.

“When I served as radioman, I was lucky to record signals transmitted by the first Sovi- et satellite. It was only a short time ago. And now the whole world listens to the news and finds out that a Soviet man is in space! No one expected this could happen so fast,” wrote G. Deyanov, Lath Operator at shop No. 1.

As Boris Chertok, who worked closely with Sergey Korolev, later wrote in his book “Rockets and People”, the trickiest part was that at the point of deployment, the launching system and the spacecraft were elements of a single dynamic system. The rocket’s movement could not be analyzed without taking into ac- count the behavior of the launching pad, and the dynamics of the pad’s working parts could only be analyzed together with the rocket position indicators.

A solution to this challenge was found at Leningradsky Metallichesky Zavod. Here, the new building of Steam-Turbine shop No. 21 (known today as No. 201), where major caliber gun mounts for the Navy were, at the time, produced, had the required high-bay area, embedding depth and erecting cranes. 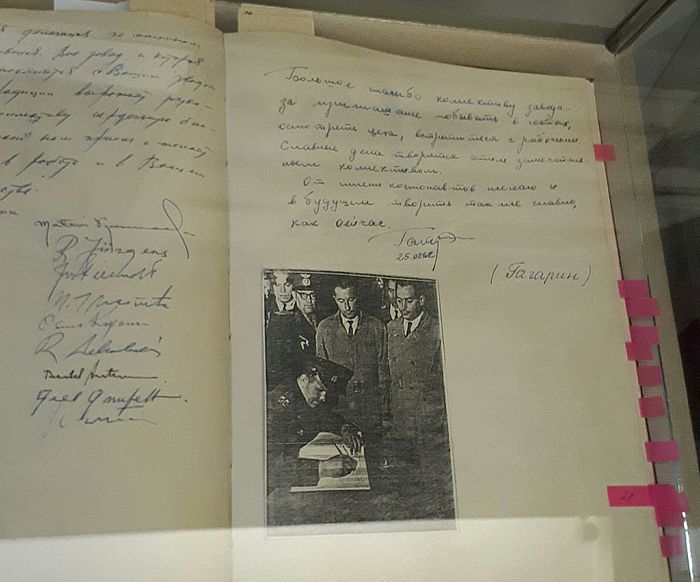 On April 12, 1961, literally every single person in the country was filled with pride and joy. The issue of Turbostroitel dated April 15, 1961 mirrored the general upbeat mood. The newspaper was filled with extracts from en- thusiastic letters written by LMZ employees – and many more letters probably remained unpublished because a lot of people wanted to express their feelings and the newspaper just didn’t have enough printed pages to put them in.

According to Boris Chertok, in the autumn of 1956 the launching system was delivered to LMZ instead of the launch site. Here, it was as- sembled and tried out by a team of specialists, including the plant workers. The experiment also required another manufacturing facility to construct full-scale mock-ups of all the assemblies made at LMZ. In Leningrad, the rocket met its launching system for the first time. Once all preparatory work was complete, a test “launch” was held – the spacecraft was lifted not with its engines, but with a crane.

The process of testing the rocket and the launching system continued day and night. Over several hundred faults in the project and design, as well as errors in operational documentation, were identified and corrected. Sergey Korolev himself visited the plant to monitor the process.

“Hundreds of design engineers, constructors, project engineers and military men were bustling about sawing, welding, reassembling all sorts of rocket parts; they were writing stuff down, discussing and debating about various issues,” Boris Chertok recalls.

“In the area of shop No. 33 where heat treatment of impellers takes place, metal structures of Gagarin’s spacecraft were as- sembled and welded,” says Vladimir Brainin, Lead Engineer at the Principal Welder Department of LMZ, and the plant’s employee since 1959. “A special platform was constructed for production of assemblies for the rocket; there were spot wielding machines and a huge pavilion tent. You could only enter the tent if you had a special pass, which a sentry always checked.” 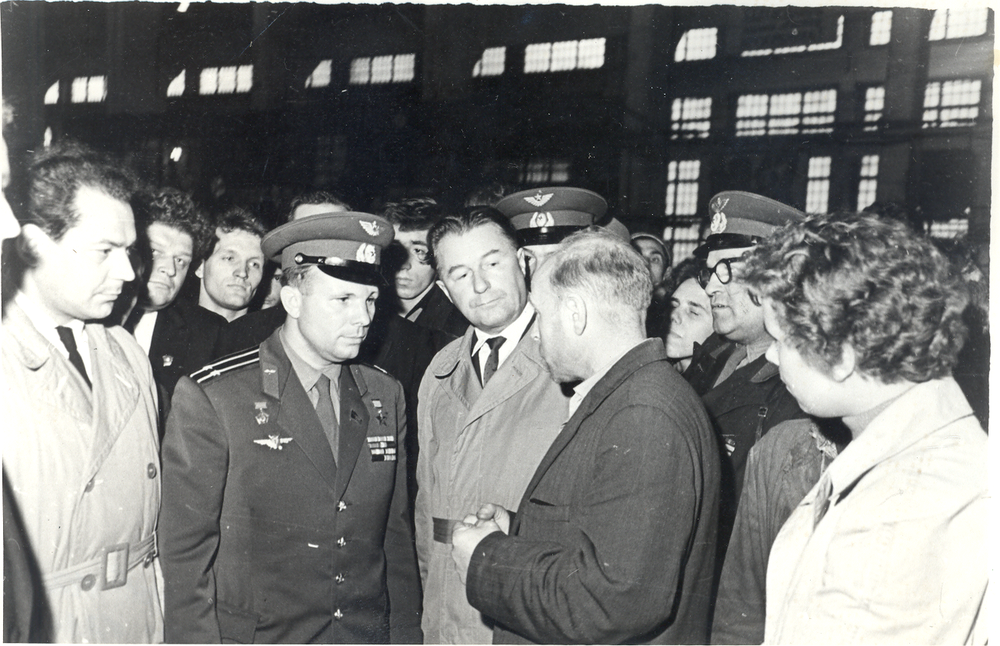 Yuri Gagarin probably forgot about this element of our plant’s “space” mission: when he visited LMZ in August 1962, he said to the workers, “No parts for our spacecrafts are produced here, but you do contribute to the conquest of outer space. Your turbines generate power which is needed to smelt metal for our satellite rockets.”

Early in the evening, the entire space between Durnovo Estate and Hydro-Turbine Shop No. 202 (then known as shop No. 19) was filled with a sea of people. All of the sev- eral thousand employees of the plant came to meet the first astronaut. Before giving a speech, Gagarin was taken on a tour of the plant. He was interested in the process of making steam and hydraulic turbines, and he enthusiastically talked to machine operators.

“I remember him visiting shop No. 33: he was shown the place where spacecraft assemblies had been welded,” says Vladimir Brainin. “Unfortunately, I didn’t have an opportunity to talk to Yuri Gagarin, even though I was standing next to him then.”

With regard to this, it is worth mentioning that, though Gagarin’s ancestors were mainly farmers, there were also workmen in his family. The astronaut’s grandfather Timofei Matveev was employed at Putilovsky (known today as Kirovsky) Plant. Yuri himself studied at Lubertsy Vocational School No. 10, and graduated with honors as a molder and founder. He also attended an evening school for working youths and Saratov Industrial Technical School. “Being a molder at a foundry shop is not easy. The job requires both knowledge and immense physical strength,” he later said.

So, the first astronaut did not look around LMZ shops as a mere tourist: he highly appreciated the employees’ efforts, being an equal of the workmen. “Here, remarkable people are doing notable deeds. In the name of all astronauts, I wish you to always work as well as you do today,” Gagarin wrote in the distinguished visitors’ book.

You don’t usually see many people at the square between shop No. 202 and Durnovo Estate, where once every year running races start as part of the plant’s sports festival. The fresh breeze from Neva, which is a frequent guest here, especially in the off-season, makes the square seem even larger than usual. It’s hard to believe that it was here, on this square, that the first astronaut – a man who became a legend, a symbol of the era after his flight to space – stood.

And it also seems unbelievable that some of the professionals who still work at LMZ witnessed that Au- gust meeting and remember even the smallest details. Gagarin spoke to the plant’s workers from a sec- ond-floor balcony of the Estate. Un- fortunately, in 2003 the whole floor was destroyed in a fire, and the re- constructed building can’t convey all the gorgeous beauty of the orig- inal, historic edifice.

“I was standing far from Gagarin, as were many others: the square was literally flooded with people,” recalls Konstantin Lapshinov, Lead Design Engineer at Gidroturbomash Special Design Bureau. “In 1957, we all held our breath listening to the beeping sound of the satellite’s signal, and after just a few years, in 1961, man made it to space. It was absolutely unbelievable. By the way, I started working at the plant the same year, in 1961.”

“It was a long time ago,” his colleague Vasily Krusanov, another Lead Design Engineer at Gidro- turbomash Special Design Bureau, says. “I remember the festive mood; everyone was so happy, and the applause was warm and loud. To tell you the truth, during my 64 years at the plant I have seen a lot of prominent people, including the President of France Charles de Gaulle, the Chairman of the Council of Ministers of the USSR Aleksey Kosygin, and the President of Indonesia Sukarno.”

Back then, in 1962, LMZ workers promised Yuri Gagarin that the plant would respond to the challenges of the dawning space era with dedicated work, “cosmic” efforts and feats of labor. And they fulfilled that promise, and this can be seen in the number of machines manufactured for Russian and foreign space stations. The plant’s contribution to the “space odyssey” will remain a key element in its history.